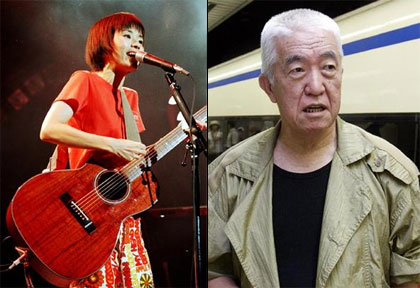 A couple of celebrities have been hospitalized with broken bones this week. Singer-songwriter Kawamoto Makoto (37) was involved in a traffic accident on Wednesday night, according to a post on her Twitter account by her colleagues. The post said, “Fortunately she is making good progress but she has suffered broken bones and bruising and is in no condition to perform.” Kawamoto was scheduled to play at a music festival in Tottori Prefecture this weekend.

Meanwhile veteran broadcast writer and talento Ei Rokusuke (78) is in the hospital yet again. He is expected to be admitted for about a month after breaking his hip in a fall at his Tokyo home on Wednesday. He is due to undergo surgery today and will need about a month of rehabilitation before being able to return to work, although his management said that they will wait to see the results of his surgery before deciding if he can host his regular live TBS radio show tomorrow. A concert scheduled for next week has been postponed until February. Ei suffered a broken toe in a fall in 2006 and needed six months before he could walk normally again without a stick. He revealed in October of last year that he is battling Parkinson’s Disease. And last November he was riding in a taxi that was involved in a traffic accident, and suffered some minor injuries.