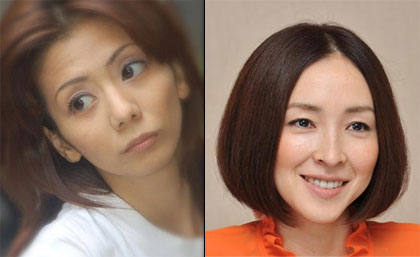 Former talento Tanaka Chizuru (33, photo left) is the latest celebrity to be arrested on drug charges. According to a statement yesterday from the Tachikawa police station in western Tokyo, the former member of aidoru group Tokyo Performance Doll was arrested on November 25 for use of stimulant drugs at the end of the summer. No further details were provided of Tanaka’s arrest or the supply route, but sources say she tested positive for the drugs in a urine test after being picked up by police at her apartment in Tokyo’s Shibuya district. Tanaka’s blog was updated on the 25th with an entry saying she had been admitted to hospital. The blog was closed down yesterday.

Tanaka entered the spotlight in 1992 when she was a prizewinner at the 6th Kokuminteki Bishojo Contesuto, an annual beauty pageant that has launched many showbiz careers. She had a moderately successful career before briefly quitting showbiz between 2004-06. Earlier this year she set up her own talent management agency.

Aso Kumiko to be a Mom
Happier news for another 33-year-old. Actress Aso Kumiko (photo right) is five months pregnant with her first child, her management revealed yesterday. She and stylist Iga Daisuke (34) married in December 2007. Aso plans to continue working into the New Year and take maternity leave until next autumn.

Aso got her start in showbiz in a similar way to Tanaka, winning a nationwide schoolgirl uniform pageant in 1995. She debuted in the movie “Bad Guy Beach” the same year. 1998 saw her not only filming her first nude scene in “Kanzou Sensei” but also winning Japan Academy Awards as best newcomer and best supporting actress. She had her first starring role in 2000’s “Himawari” and she is now one of Japan’s most prolific young actresses, with over a dozen awards and almost 60 movies to her name.