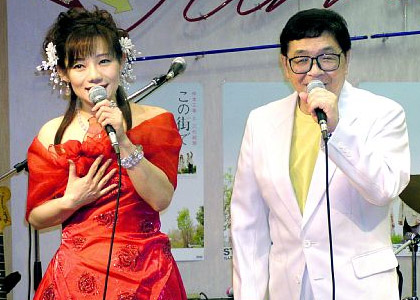 If it’s good enough for the 68-year-old Kato Cha…The veteran comedian shocked the showbiz world recently by marrying a woman 45 years younger. Well, his former Drifters comrade Nakamoto Koji (70) may soon be following suit, as his working relationship with enka singer Midai Junka seems to have turned romantic, according to this week’s issue of “Shuukan Bunshun” magazine.

Nakamoto has three children from his previous marriages. His first wife died in 1982 and he remarried in 1991 to a woman 25 years younger. They had a son and two daughters but divorced in 2004. Nakamoto and Midai have been close for about five years and released a music CD of duets in 2008. Her age is not given in the magazine article but it says she is “in her 30’s.” Nakamoto’s mother died in June, so there will certainly be no marriage announcements until the first anniversary of that date.

In addition to Kato, other elders of the showbiz world who have got remarried in their twilight years to much younger ippanjin include singer Terada Minori (68), who married a 33-year-old last week; actor Kobayashi Kaoru (60), who it was revealed just earlier this month remarried to a 30-something woman a few years ago and now has a baby son; and actor Sakai Masaaki, who chose his 65th birthday last month to marry a 43-year-old woman.

Yuukorin in New Legal Battle
Angela Aki to be a Mom