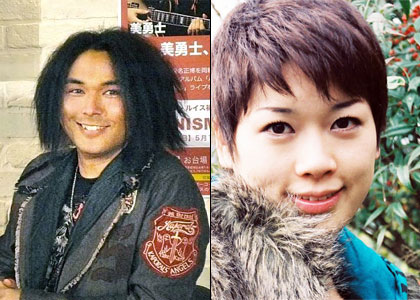 Musician Miyuji (30) and actress Hinata San (27) are engaged to be married and are expecting their first child in the autumn, according to the Sports Hochi newspaper. Both are fairly minor celebrities, but Miyuji is the son of rock singer Kuwana Masahiro (58) and his former wife, singer Ann Lewis (55), while Hinata is a former star of the Takarazuka theatrical troupe. Kuwana was one of the most influential rock vocalists of the late 1970s and 80s and had a major hit with “Sexual Violet No.1” in 1979. He and Lewis were married from 1980-84. Born to a Japanese mother and U.S. navy father, she was a child actress and later became a pinup idol and pop singer before switching to rock vocals. She had several hits in the 1970s.

Miyuji was born in Hawaii and made his first recording on his mother’s single “Hyogara to Pink” in 1998. He made his TV acting debut the following year. He released his debut album in 2001 and now mostly performs live. Hinata entered the all-female Takarazuka school in 1999 and went on to become a star in male roles. She retired from the troupe in November 2009 but has continued her career as an actress. She and Miyuji started dating after they worked together last year in the stage musical “Welcome to Jubilee.” They haven’t announced a date for a formal wedding.