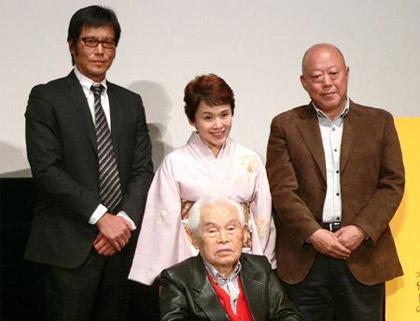 Japan’s entry for next year’s Oscars has been chosen. The 7-member overseas selection committee of the Motion Picture Producers Association of Japan (known by the Japanese abbreviation Eiren) met this week to choose from 22 candidates. They settled on “Ichimai no Hagaki” (One Postcard) by the veteran director Shindo Kaneto (99, photo center). Committee member and movie critic Shinada Yukichi said, “This movie is the pinnacle of Shindo-san’s long career and it towered above the other productions. We look forward to seeing how the final movie by a 99-year-old director will be received at the Academy Awards.” Among the other films considered by the committee were Suo Masayuki’s “Dancing Chaplin” and “Yokame no Semi” by Narushima Izuru.

“Ichimai…” is based on Shindo’s experiences during World War II and tells how a family is torn apart and rebuilds following the death of one young soldier. The strong cast includes (photo rear, L-R) Toyokawa Etsushi, Ohtake Shinobu and Musaka Naomasa. Shindo has said the movie is his last, and it won him a special jury prize at this year’s Tokyo International Film Festival. He is scheduled to appear at an event at the Ginza Theatre Cinema in Tokyo tomorrow and give his reaction to his film’s latest recognition.

The shortlist of movies that will vie for the Best Foreign Film award will be announced in January and the Oscar ceremony will be held in February. Last year’s selection, “Kokuhaku” managed to make the shortlist but failed to repeat the 2009 success of “Okuribito.”