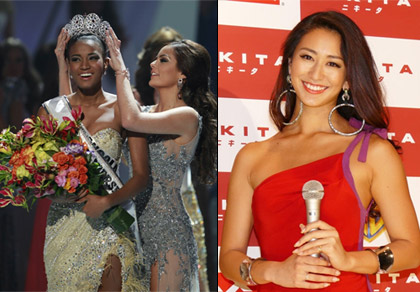 Japan will have to wait another year to capture its next world beauty crown. Kamiyama Maria (24, photo right) was hoping to repeat the success of Japanese entries in recent years, including the crowning of 2007 Miss Universe Mori Rio (24), but failed to make the last 16 of this year’s event held in Sao Paulo, Brazil. The local favorite came in 3rd, behind the Ukrainian runner-up and Miss Universe 2011, business student Leila Lopes (25, photo left) of Angola.

Kamiyama, a native of the Tokyo youth mecca of Shibuya, is very much in the mold of recent Japanese fashion models with a look that could easily be half-western. But her main exposure to English came from a year taken off from college and spent working in Hawaii. She may not have made the final cut on the world stage but like Mori and 2006 runner-up Tachibana Kurara (29), she will surely continue to be in demand at home.