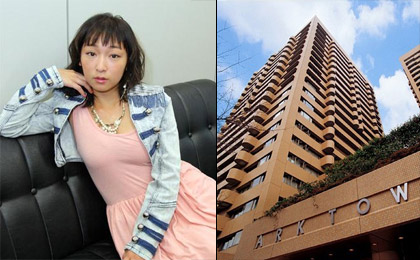 Troubled former Morning Musume member Kago Ai (23) was admitted to a Tokyo hospital yesterday morning after an attempted suicide. An employee of her management company rushed to her apartment in the capital at about 11:55am after receiving a phone call in which Kago said she was about to kill herself. The staffer found Kago semiconscious on the floor, with shallow cuts on her wrists, and called emergency services. She was taken to the Japanese Red Cross Medical Center in Hiroo. According to police at the Azabu station in central Tokyo, the talento was diagnosed with acute drug intoxication from an overdose, believed to have been tranquilizers, but her condition is not believed to be life-threatening.

Kago’s actions were no doubt triggered by last Tuesday’s arrest of her 44-year-old boyfriend Ando Haruhiko on charges of attempted extortion. Kago was present at the time and also subjected to police questioning. Ando describes himself as the director of a restaurant business but is allegedly running something closer to a prostitution ring for elite Tokyo businessmen and celebrities. He has been charged with using his connections with the Yamaguchigumi, Japan’s most notorious yakuza organization, to get out of debts totaling some ¥20 million. Police are in the middle of a coordinated campaign to sever ties between organized crime and showbiz. Exposed relations with the Yamaguchigumi is what recently forced top star Shimada Shinsuke (55) to retire.

Kago, who has been in showbiz since she joined Morning Musume at the age of 12, was fired from the group in March 2007 for repeatedly breaking non-smoking rules. She has written and spoken publicly about her history of wrist cutting, and she appeared at a suicide prevention event in September 2008. Though her relationship with Ando is probably not a healthy one for her, it did allow her to rebuild something of a career. She released her comeback solo single in 2009, performed solo overseas for the first time last year in New York, and this year she released a jazz DVD. Kago, a country girl from Nara, has continued to enjoy a rich lifestyle and lives in Ando’s apartment in the luxurious 25-story Ark Towers East close to the Spanish embassy.

Kago has been trying to leave her management agency, Mainstream, for several months. But the company insists that she honor the two years remaining on her contract. She has fought back by holding a concert and starting up a blog without company approval. In an attempt to buy her way out, she is said to have turned to Ando for help. Speaking to reporters at the hospital yesterday Mainstream president Itoh Kazuyuki said Kago refuses to see him. He said he thought she was no longer living with Ando and he has repeatedly urged her to leave him.