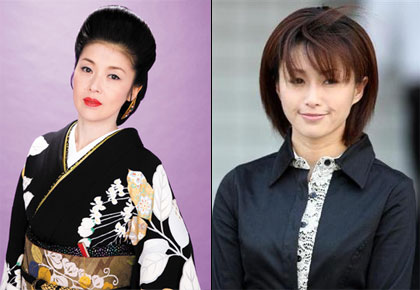 Enka singer Fuji Ayako (49, photo left) is taking a break from work due to health problems, it was revealed on Monday. She is suspected of suffering from cataplectic hearing loss. She attended an event at her art gallery on May 30 but noticed a problem the following day. A hospital checkup indicated that stress and overwork may have led to the condition which if left untreated could threaten her career. She was told to take complete rest for the time being. She withdrew from an NHK concert show on June 1 and has canceled all appearances since.

Ginpunchou Breaks Rib in Stage Fall
Actress Ginpunchou (58) is making a speedy recovery from a broken rib suffered during rehearsals. The injury happened after she fell from a 2m-high set on the stage at the Tokyo Geijutsu Gekijo theater. She was taken to hospital but is now resting at home. The show is scheduled to run from June 20 to August 8. Takahashi Keiko (55) will stand in until Ginpunchou makes a full recovery, which she is expected to do after June 25. The production of “Za Character” stars Miyazawa Rie (37) and is produced by Noda Hideki (54).

Kaela Finally Reaches No.1
Better news for popular singer Kimura Kaela (25). “Ring a Ding Dong,” her first single since the announcement of her engagement to actor Eita (27), has become her first ever No.1 on the Oricon chart. The song has spent a record 19 straight days at the top of the daily rankings of the Chaku-Uta digital download service.