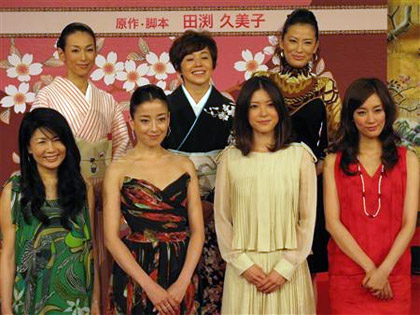 Suzuki Honami (43, photo left rear) is to make an overdue return to acting in next year’s NHK taiga drama. Making her first public appearance in 11 years yesterday as she was named as one of the stars of “Gou, Himetachi no Sengoku,” she said she was “very nervous.” The historical drama series, which will air every Sunday evening throughout 2011, focuses on the younger sister of medieval warlord Oda Nobunaga (1534-82). The main female cast members were announced yesterday, and the lead role will be played by Ueno Juri (24), while Suzuki will play her mother. Other stars include Ohtake Shinobu (52), Miyazawa Rie (37) and Mizukawa Asami (26). Filming will begin in August.

One of the most popular actresses of the late 1980s and early 90s, Suzuki married comedian Ishibashi Takaaki (48) of the duo Tunnels in 1998 and retired when she became a mother the following year. Like the character she will play in the taiga drama, she is now the mother of three girls. Her last public appearance was in September 1999, at a PR event for her last movie, “Ichigen-san.”

Mattchan Laid Up for 2 Months
Comedian Matsumoto Hotoshi (46) is taking the next couple of months off as he undergoes hip surgery, according to Yoshimoto Creative Agency. The major comedy management agency announced by fax yesterday that “Mattchan,” one half of the veteran duo Downtown, is to undergo surgery to deal with a problem that has been causing him pain for the last six months. The announcement explain why he suddenly pulled out of a scheduled TV appearance last Thursday.

Matsumoto is currently resting at home and won’t be able to receive treatment for about a month. He will then spend about a week in hospital and a further few weeks recuperating. During his expected two-month absence, comic partner Hamada Masatoshi (47) will fill in for him.