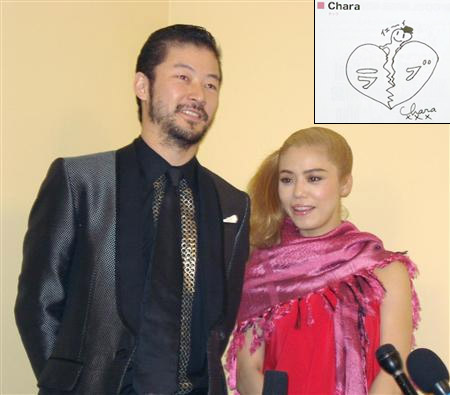 Anyone looking for clues as to why singer Chara and actor Asano Tadanobu have split up might want to listen to her latest single. Chara (41) and Asano (35) both announced on their respective websites on Saturday that they had ended their more than 14 years of marriage. Considered to be a close couple, and with two children of 14 and 9, their divorce announcement came as a surprise to media commentators. A source said that Chara has custody of the children and she herself said in her statement that she and her ex plan to stay in touch. But one cause of the split is said to be his extra-marital affair, something that is clearly hinted at in Chara’s latest single “Broken Hearts.” She performed at the weekend’s Fuji Rock Festival, an event also attended by Asano, though the DJ show he was scheduled to appear in late Friday night was canceled due to heavy rain. The festival pamphlet featured sketches by various artists. Chara’s, which was drawn about a month ago, speaks volumes. The lyrics include such lines as “You say you can continue loving only me…really?” and “I wish I had magic power to read your heart. Even things I don’t really want to know.” The pair married shortly after working together on the 1994 movie PiCNiC.” Chara was several months pregnant at the time. The two were together at last year’s Academy Awards, where the movie “Mongol,” in which Asano played Genghis Khan, was nominated for the Best Foreign Language Film oscar.

• X Japan drummer and leader Yoshiki is to undergo emergency surgery, he announced yesterday. He said on his official fan site that he will go under the knife at a hospital in Los Angeles today to treat a herniated disk of the cervical veterbra, a condition that has plagued him for some time. Doctors say that after the operation he will need several weeks of complete rest followed by at least a month of rehabilitation. If his condition hasn’t cleared up after several months, he will need further surgery. X Japan are scheduled to perform in France on October 10.