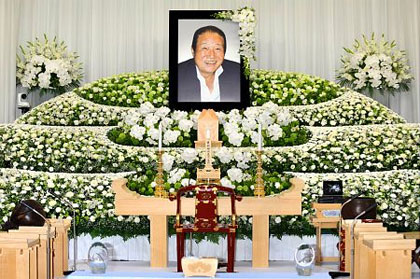 Just about every major Japanese celebrity turned out yesterday for a memorial service for Nagara Jun, who died in an accident on a Hawaii golf course on May 2 at the age of 74. Known as the “Don” of the entertainment world, he was the chairman of the Nagara Productions talent management agency. He is credited with building some of the best-known showbiz careers of the last half-century, particularly in the world of enka music. Some 5,000 people made their way to Aoyama Sougisho funeral home in central Tokyo.

Born in the downtown Tokyo district of Asakusa in 1938 the son of a traditional naniwabushi storyteller, Nagara’s real name was Kanbayashi Yoshitada. He entered the world of showbiz in 1958 and became manager of some of the major stars of the day, setting up his own agency in 1964. He went on to groom a great many celebrities who would become household names, such as enka singers Mizumori Kaori and Hikawa Kiyoshi, and actors Umemiya Tatsuo, Nakamura Tamao and Gucchi Yuzo. He also produced many hits by A teary-eyed Hikawa (34) said yesterday, “The chairman’s spirit will live on in my heart forever. I will strive to repay my debt to him and become a fully developed singer.”

Takeshi Out of Step, Even With Mickey Mouse
AKB48 Rule the Roost

You can get £5 off your first order if you register with Natural Natural using this link:
prz.io/9oP1gY9ua
...