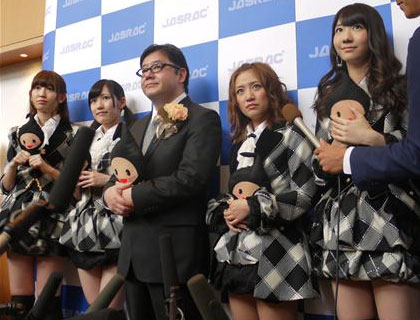 A couple of stories today that prove just how dominant a commercial force AKB48 are. Their latest single, “Manatsu no Sounds Good!” has not only entered the Oricon charts at No.1 as expected but has set a new record for release-day sales. The single sold a whopping 1.171 million copies on its first day alone, beating the group’s own record of 1.046 million sold by “Kaze wa Fuiteiru.” It is also their seventh straight million-selling single. One gimmick that helped boost sales of the new single is that every copy entitles the owner to one vote in the upcoming “election” to choose members for the next project. That event will be held at Nippon Budokan on June 6.

And the Japanese Society for Rights of Authors, Composers and Publishers (JASRAC) today published its annual ranking of the most successful royalty-generating hits of last year. The figures are based on revenues generated not only by music sales but also from karaoke and other commercial uses. And not surprisingly the girl group with the ever-changing lineup claimed all the top spots and had five of the top 10 places. The biggest money spinner of last year was the appropriately titled “Heavy Rotation,” followed by “Ponytail to Shushu,” “Beginner” and “Everyday no Kachusha.” Pop rock band Ikimono-gakari grabbed a bit of the limelight with “Arigatou” in 5th place, followed by AKB48 again in 6th with “Aitakatta.” The guru behind the group, Akimoto Yasushi (56, photo center), is also the producer and lyricist for all five of those major hits, meaning he is making some very serious Yen indeed.

Meanwhile, the top 10 most commercially successful Japanese songs overseas were all from popular anime, led by “Doraemon BGM.”