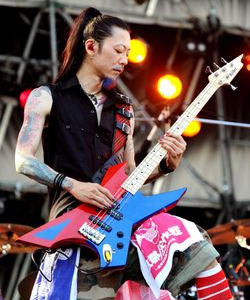 It was reported this evening that musician Baba Ikuzou (46), better known as Ikuzone the bassist with rock band Dragon Ash (profile), died of a heart attack several days ago. A funeral service has already been held by family and relations and a memorial service will be held in the near future. Baba was found collapsed by a family member in the recording studio in his Tokyo home on the evening of April 21. He was rushed to a hospital but was declared dead of acute heart failure shortly before 11pm.

Dragon Ash was formed in 1996 by Furuya Kenji and Sakurai Makoto when both were still in junior high school. Baba was taken on as the group’s bassist even though he was 30 at the time, making him something of a mentor for his young bandmates. It took a couple of years, four singles and the addition of DJ Bots before the band got their break with the Top 10 release “Let yourself go, let myself go.” A couple of months later, they had no less than three singles in the Top 10. Of those, “Grateful Days” went on to become Japan’s first ever rap single to make it to No.1. The song was one of several in which the band included samples of US rockers The Smashing Pumpkins. Dragon Ash had a maturity way beyond their years and with their mix of rap and metal they quickly established themselves as a cut above the rest of their local competition. They solidified that success with a series of successful releases and commercial tie-ups over the next decade, expanding from a quartet to a seven-member band in 2003.