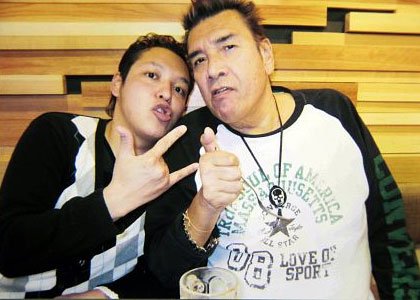 One of the most likeable “bad guys” of Japanese TV and movies has passed away. Actor Yasuoka Rikiya (photo right) died yesterday of heart failure at a Tokyo hospital. He was 65. He had a history of liver problems and was diagnosed with the rare and severe Guillain-BarrÃ© syndrome in June 2006. In August 2010, after being diagnosed with liver cancer, he received a partial liver transplant from his son Rikito (26, photo left), himself an aspiring actor. Rikito spoke yesterday about how he learned last December that his father’s cancer had reappeared. As is common practice in Japan, Rikiya was not told hat he had less than a year to live and dreamed of making a recovery and appearing on the big screen with his son someday. He started writing a blog in February and had been traveling with his son. The photo above was taken when they went drinking together for the first time. His last job was an interview for a women’s magazine at the end of March and last Friday, the day he was hospitalized, he had been scheduled to meet with publishers about plans for an autobiography.

Yasuoka started a rock band with friends while a high school student in 1963. A third dan in karate and 2nd dan in judo, he became a kickboxer in 1969. The following year he was recruited by actor Umemiya Tatsuo (74), star of the “Furyo Bancho” yakuza movie series, to play the supporting role of Apache in several of the movies. Yasuoka’s height and heavy build meant that he would forever be typecast in those kinds of roles. He certainly didn’t mind, adding to his own legend with catchphrases like “I love drink, women and fighting” and he was said to drink 20 beers and 4 bottles of whiskey a day. But he was able to show his lighter side, going very much against type as the character Hotateman (Clam Man) in the hugely popular 1980s comedy show “Oretachi Hyokinzoku.” His face may be familiar to western movie audiences through his supporting role in Itami Juzo’s 1985 classic “Tampopo” and Ridley Scott’s 1989 thriller “Black Rain.”