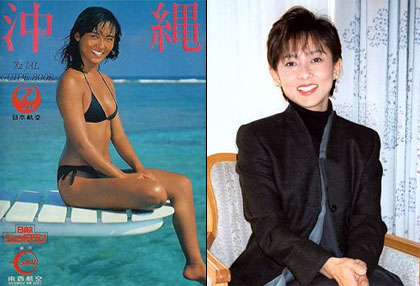 Actress Saito Keiko (50) remarried at the end of last year, the Sports Hochi newspaper revealed today. The former Japan Airlines campaign girl tied the knot with the president of an advertising company last November and are living together in Tokyo with Saito’s 11-year-old daughter from her previous marriage.

While studying psychology in the education department at Kumamoto University in 1982, Saito’s bronzed body and good looks helped her beat 800 hopefuls for the high-profile job of JAL Okinawa Campaign Girl (photo left). This break gave her a chance to get into showbiz, and by the following year she was appearing on TV as the “solutionist” on the TBS show “Quiz Derby.” She went on to be come a regular face on the variety show circuit and established herself as an actress in movies and dozens of TV dramas. In 1994 she was named the year’s Best Supporting Actress at the Nikkan Sports Movie Awards. In July 1997 she married a businessman and they had a child in 2000, but the marriage ended in 2008.

Funky Monkey Wedding
Also recently married is DJ Chemical (29) of the J-pop trio Funky Monkey Babys, who broke the good news on his blog yesterday. His family run a Buddhist temple and he chose April 8, the birthday of Buddha, to tie the knot. His described his bride only as “a 30-year-old former musician.”