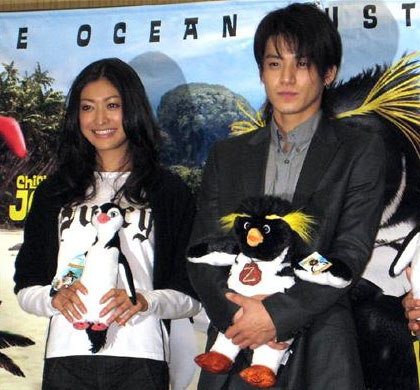 White Day may be an entirely commercial holiday, but it’s romantic enough for one young showbiz couple. Actor Oguri Shun (29) and actress Yamada Yu (27) sent out a handwritten fax to the media last night announcing that they would be tying the knot on March 14. The day, which is an auspicious “taian” on the traditional calendar, also marks the fourth anniversary of when the pair started dating. Sources close to the couple say they are already living together but have no plans for a wedding ceremony, reception or honeymoon. They also answered the first question asked when marriage is announced – Yamada is not pregnant. It was rumored that they would get married last July, but the Great Eastern Japan quake and tsunami in March would have forced them to postpone plans.

The two stars, both rightly considered among the best looking in showbiz, worked together as voice actors on the animated film “Surf’s Up” in 2007 (photo). They are said to have become close after working together on the 2008 NTV drama “Binbou Danshi – Bonbimen,” which featured Oguri’s first leading role in a drama series. Their relationship was revealed in May of 2008 and, unlike many showbiz couples, they have been open about it since. In New Year of 2010 they traveled together to Hawaii, but soon after their romance was said to be on the rocks several times due to Oguri’s womanizing.

Both are enjoying success in their careers – Oguri is currently in China filming a movie (so the marriage registration will not be the most romantic occasion), while “Uchuu Kyodai,” in which he co-stars with Okada Masaki (22), is due to be on screens in May. Yamada recently received very positive reviews for her theatrical debut in last November’s “Villa Grande Aoyama.”

Aidorus for Tohoku
No More Speeding for this Astro Boy