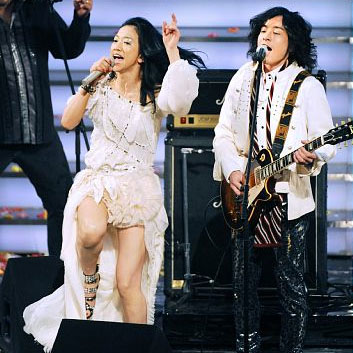 Deserved happy news for Dreams Come True vocalist Yoshida Miwa (46, photo left) who recently got married, it was revealed yesterday. And not only has she found true love but her new husband is a full 19 years younger than her! Okinawa native Juon (27, photo right) is the vocalist and guitarist of the trio Fuzzy Control. The two are said to have registered their marriage on March 8. The date was auspicious because not only can it be read in Japanese as “miwa” but it is also Juon’s birthday. The couple don’t have plans for a wedding ceremony or reception, but the new DCT single is appropriately titled “Time to Shine.”

Fuzzy Control made their debut in 2003 and first collaborated with DCT on the February 2009 single “Goodbye My Schooldays”. They have since performed as their backing band and written songs together. Fuzzy Control have released a dozen singles and five albums to date, with moderate success. They are scheduled to perform in Tokyo on March 25, while DCT’s next scheduled live appearance is on May 23. They are currently recording in New York.

We say that Yoshida’s happiness is deserved because in 2007 she lost her common-law husband, visual director Sueda Ken, to a brain tumor. He was just 33. The couple married in May 2004 but never registered their marriage. Yoshida’s musical partner in DCT, Nakamura Masato (53), married former High and Mighty Color vocalist Maaky in June 2008 and they have a 2-year-old daughter.
Related stories:
DCT’s Yoshida Miwa Loses Husband (Oct. 1, 2007)