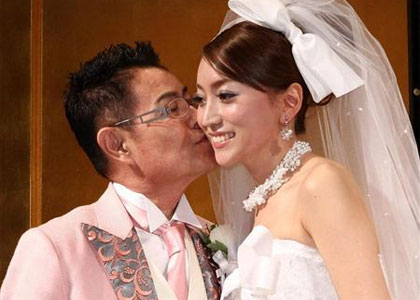 No, that isn’t the father of the bride kissing his daughter, that’s the groom! Veteran comedian Kato Cha (69) has revealed his bride Ayana for the first time, and no doubt he chose yesterday to do so as it was his 69th birthday, making her exactly one third of his age! The two actually tied the knot last June but waited until yesterday to hold a lavish wedding ceremony and reception for 230 guests at the BelleVie Gaza Hall in Koshigaya, north of Tokyo. Kato wore a pink tuxedo jacket while Ayana (23) wore a wedding dress designed by talento Kanda Uno.

A member of the legendary comedy group The Drifters, Kato is on his second marriage. Fellow members Takagi Boo (79) and Nakamoto Koji (70) were at yesterday’s celebration, and Nakamoto hinted that he and his enka singer girlfriend Midai Junka might also get married within the year. Midai’s age is not published in the media but she is said to be in her 30s. Shimura Ken (62) was the only surviving member not in attendance as his TV schedule kept him away. He recorded a message of congratulations on video that was shown at the reception.