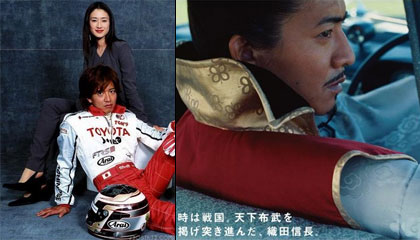 Japan’s leading heartthrob Kimura Takuya (39) seems to have gotten a little too into his TV role as a race driver. The SMAP member and star of the 2005 Fuji TV drama series “Engine” (photo left) has been fined twice in recent months for speeding, it was revealed in today’s issue of the weekly “Shuukan Bunshun” magazine.

The article says highway police in Chiba prefecture caught him doing 120 kilometers an hour in an 80 kph road last September. He and his wife, singer Kudo Shizuka, were on their way to do a bit of surfing in their Chevrolet Astro. Kimura was nabbed again in Tokyo in January, this time on a Tokyo street, and his license was suspended for a second offense. Management at Johnny’s Jumusho have been forced to come clean on the matter, publishing a statement in local newspapers. They said, “As a member of society, Kimura is deeply ashamed of his actions and has promised not to let it happen again.”

Kimura has a long history of commercial tie-ups with Toyota, most recently appearing in their Corolla Fielder ads since last October (photo right), and for a lesser star those ads would be off the air faster than a speed camera could catch. But KimuTaku is such a player that the car maker has decided to continue showing the ads. Under the slogan “Fun to Drive, Again,” the ads also feature veteran comedian/director Kitano “Beat” Takeshi (65). A Toyota spokesperson said today, “(Kimura) has been warned from our side to obey traffic rules. We will enforce this strictly.”