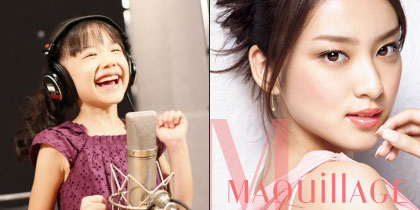 One of the showbiz rankings that comes around at the end of the year is for the so-called “CM Queen,” the female celebrity with the most commercial contracts. Currently top of the ranking this year is actress Ueto Aya (26) with 14 top brands to her name. She’s followed by child star Ashida Mana (7, photo left), who debuted in 2009 and won a best newcomer award for a TV drama role last year. This year she became the youngest actress to have a starring role in a primetime TV drama series, in Fuji TV’s “Marumo no Okite.” And the catchy single “Maru Maru Mori Mori!”, which she recorded as one half of a duo with Suzuki Fuku (7), has been the smash hit of the year among the pre-teen crowd. Just last week she released her debut solo CD, and she has had 12 CM contracts so far this year.

Also making her breakthrough this year is actress Takei Emi (17, photo right). Yesterday it was announced that she is the new “image character” for top suit retailer Yofuku no Aoyama, bringing her current total to 9 commercial contracts and 11 in total for the year. Takei is with the same management agency as Ueto and, as is expected, talks about her ambitions in terms of showing due respect to her sempai. “I hope I can be like my sempai someday.”