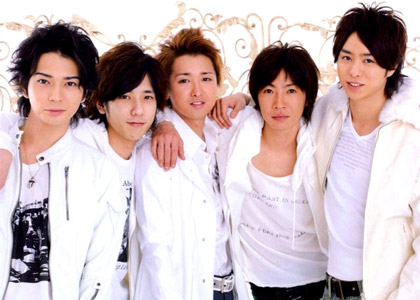 Johnny’s Jimusho aidoru group Arashi are still the country’s biggest selling pop artists. For the second year running they have topped Oricon’s rankings of the best-sellers of combined music and video content, based on sales from almost 40,000 stores across the country. The group had combined sales of almost ¥17.2 billion, an increase of ¥2.5 billion from last year’s total. They are the first Johnny’s act to top the rankings in two consecutive years, and the first artist to do so since Inoue Yosui (62) did it in 1974-75. Arashi also ranked top in a record seven different categories.

2010 was a big year for Arashi in many different ways. In September they became the first act to play 4 consecutive nights at the Yoyogi National Gymnasium in central Tokyo; their ongoing national tour is their biggest yet, with 16 shows for 860,000 fans; members of the group have been active in a wide variety of TV shows, commercials and movies; their CD “Boku no Miteiru Fuukei” is the only album to sell more than a million copies this year; their concert DVD “Arashi Anniversary Tour 5 x 10” had a record-breaking first run of 477,000 copies; all six of their singles released during 2010 made the annual sales ranking Top 10. And to top it all off, the group will be emcee for the first time for NHK’s annual “Kohaku Uta Gassen” concert on New Year’s Eve.

An AKB Christmas
Asagi Named as the “Other Woman” on Twitter