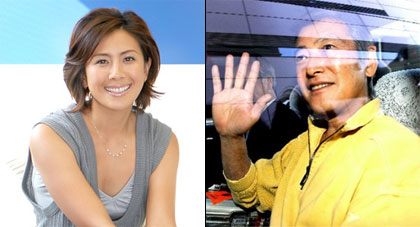 Talento Hasegawa Rie (37) has stayed true to form in her latest romance, going for a guy who is old enough to be her father. She and actor Ishida Junichi (56) had an on-again, off-again romance for more than eight years. But he ended up marrying someone even younger, pro golfer Higashio Riko (34). And now the latest issue of woman’s weekly “Josei Seven” has reported that Hasegawa’s new beau is none other than actor Kanda Masaki (59). The couple have been seen in and around Tokyo and coming in and out of Kanda’s apartment building in the capital. Management for both stars have acknowledged the relationship, though in Kanda’s case they commented that marriage was unlikely.

The pair’s romance is said to have started back in June, shortly after Hasegawa was a guest on the TBS morning show “Asada! Nama Desu Tabi Salada,” which is hosted by Kanda. These days Hasegawa’s TV appearances are mostly in her capacity as a “vegetable sommelier” and the show featured her doing a food report from southern Italy. She is also an accomplished marathon runner.

Kanda was of course previously one half of the biggest couple in Japanese showbiz. He married super idol singer Matsuda Seiko (48, profile) in 1985, and they had one child, talento Kanda Sayaka (24). But the marriage ended in divorce in 1997. As a divorcee, Kanda was linked with actress Ikegami Kimiko (51) and a Ginza hostess bar “mama-san.”