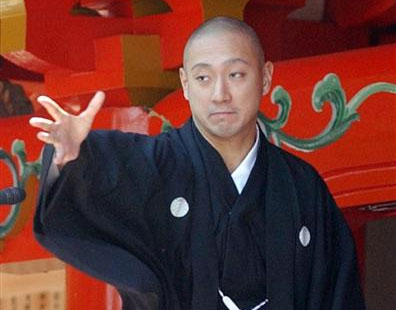 More updates on the Ichikawa Ebizo (32, photo) assault case. The latest details on the half-Japanese, half-American man for whom an arrest warrant has been issued include a report in the Sankei Shimbun newspaper that he was possibly the victim of the incident. The 26-year-old man, who has a wife and twin children has told friends that he didn’t throw the first punch. He also suffered injuries in the fight with Ebizo, and has a doctor’s letter saying he will need about two weeks to recover from his injuries. He says he has no intention of going on the run but has not turned himself in to Tokyo police because the media reports on the incident have been “unfair.”

If the claims that Ebizo was not simply a victim of assault but actually started the fight prove to be true and he is prosecuted, it would have serious repercussions for his career. In addition to any legal penalties, probably no more than a few hundred thousand yen, he would be expected to go through a self-imposed period of penitence. He would not be able to appear in a stage production scheduled for January. If the show is cancelled the losses would be several hundred million yen, and even if Ebizo were replaced by another actor, ticket cancellations would be likely as he is the star of the show. He would also lose several lucrative commercial contracts, with the cost of losing his three major contracts believed to be about ¥500 million.
Related stories:
Ebizo was “Looking for a Fight” (Dec. 1, 2010)
Related stories:
Warrant Issued for Ebizo Assault (Nov. 30, 2010)

Kato Koji on the Mend
Talento Kato Koji (41) made a telephone appearance yesterday on the NTV morning show he regularly presents. He spoke about the 2-hour surgery he underwent on November 29 to repair the fracture dislocation to his right ankle that he suffered playing futsal. He expressed his surprise after the surgery that he had 5 bolts inserted in his ankle. He is expected to be out of the hospital in about a week and will return to work after a period of rehabilitation.