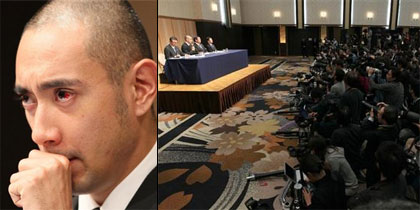 Kabuki star Ichikawa Ebizo (32) held a press conference at a Tokyo hotel yesterday evening to give his side of the story of his recent assault. About 500 reporters and cameramen gathered at the Grand Prince Hotel Takanawa for a chance to ask questions about the November 25 incident. Ichikawa, dressed in a simple black suit and tie, bowed deeply and often in apology and repeatedly expressed his remorse to kabuki fans, his theater colleagues and, though not directly, his commercial sponsors. Though his left eye was clearly bloodshot and his face did appear a little swollen, he didn’t look as beaten up as the media have been painting him. He is said to have undergone “major” surgery on his facial injuries, but there were no signs of scars or other after effects. But during the course of the press conference, which ran about 30 minutes over the planned one hour, he painted himself as an innocent, if drunken, victim. He said he had feared for his life and repeatedly denied all of the accusations that have been made against him.

Associates of the former “bosozoku” gang leader for whom an arrest warrant has been issued have insisted that Ichikawa gave as good as he got in the early-morning fight at a karaoke bar in the central Tokyo district of Minami Aoyama. A doctor who recently treated the 26-year-old man said yesterday that he claimed the actor hit him in the face with an ashtray. The man is said to have been angered at the aggressive treatment Ichikawa dished out to another, more senior former gang boss, including forcing him to drink tequila from an ashtray, pulling him by his hair, and throwing alcohol in his face. Ichikawa has denied all those claims and insists he was simply trying to look after the man, who was too drunk to stand.

It remains to be seen whether yesterday’s appearance and statements will turn out to be true and whether Ichikawa will be able to fully recover from the damage that has been done to his personal and professional reputation. Meanwhile his wife, freelance newscaster Kobayashi Mao (28) is to return to work. Since she and Ichikawa married in March she has been supporting her husband’s career and has spent the last two weeks in hospital with him. But she will soon return to the Fuji TV studios to record a pair of episodes of the show “Kiseki Taiken! Unbelievable.”