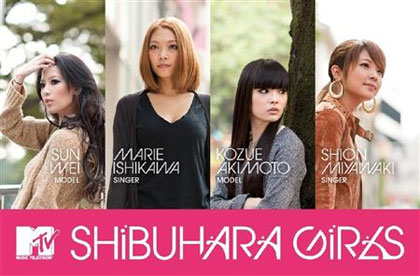 To promote the new MTV Japan reality show “Shibuhara Girls” the focus is on the fact that it marks the ‘acting’ debut of model Akimoto Kozue (23). Which is significant mainly because she is the daughter of sumo legend Chiyonofuji (55), now a sumo elder and known as Kokonoe “oyakata” (stablemaster). In his heyday as the most dominant sportsman of his generation, he was known as “The Wolf.”

The new MTV show will air late Saturday nights from January 8, and the network has already agreed to show it in 16 countries and regions across Asia. Modeled on “The Hills” and billed as a “reality drama,” it focuses on the daily work and private lives of Akimoto, local singers Ishikawa Marie and Miyawaki Shion, and Chinese model Sun Wei. All of whom, of course, are very pleasant on the eye. The name is an amalgamation of the neighboring Shibuya and Harajuku districts of Tokyo that are a fashion and cultural mecca for the youth of the capital.