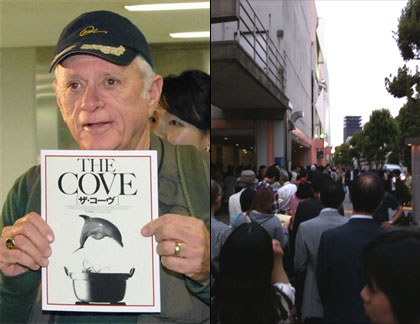 Dolphin conservationist Ric O’Barry (70) landed in Tokyo this week and was met with tight security and dozens of reporters. Here to promote the Oscar-winning documentary “The Cove,” he once again made clear that the movie is “not Japan bashing in any way.” Dismayed by the decision by several cinemas in Tokyo and Osaka to cancel their plans to screen the film, he called on theater owners to ignore the protests from right-wing groups. Appearing briefly at a sold-out screening and panel discussion last night in Nakano, Tokyo (photo right), he echoed the appeal made earlier in the week by dozens of Japanese journalists and film makers that the protests are in violation of Article 21 of the constitution, which prohibits censorship and protects the right to freedom of speech. That appeal was made by such prominent figures as movie director Koreeda Hirokazu, journalist Tahara Soichiro and feminist Ueno Chizuko. “This is a film that has been widely shown abroad. If the work, which is about Japan, cannot be shown in Japan, it only underlines the weakness of the freedom of speech in Japan,” they said in the statement.

Among the panelists at last night’s event was Suzuki Kunio, founder of neo-right wing organization Issuikai. But rather than support his fellow nationalists, he condemned the protests and said Japanese people needed to see the movie and make up their own minds about the issues.

O’Barry will meet with a variety of Japanese citizens and media during his stay in Japan, leading up to the theatrical release of “The Cove” on June 26.

Watch the exclusive Japan Zone interview with Louie Psihoyos, director of “The Cove.”