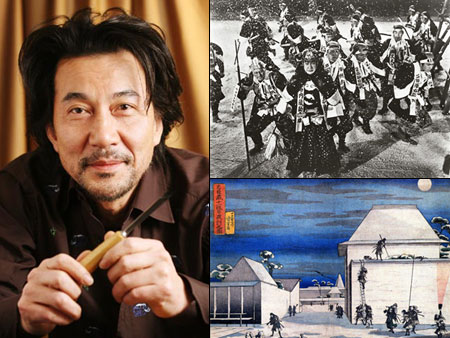 One of the most popular samurai dramas of them all is to get the Hollywood treatment. It was announced yesterday that the Warner Brothers studio is to make a movie related to the Chushingura story with acclaimed actor Yakusho Koji (53, profile) in the lead role. The project will be directed by Sugita Shigemichi (66), who is best known for the long-running Fuji TV drama series “Kita no Kuni Kara” (From the Northern Country). Chushingura is a famous tale of samurai vengeance, a story that has been told in countless ways in kabuki, bunraku, stage plays, films, novels, manga, TV shows and other media.

There are gaps in the historical records of the events which took place at the beginning of the 18th century. This has left room for many fictionalized accounts of how the forty-seven ronin (masterless samurai) undertook a mission to avenge the death of their master, the daimyo (territorial lord) Asano Naganori, who was ordered to commit seppuku (ritual suicide) after pulling his sword on a protocol official, Kira Kozukenosuke. The ronin accomplished their mission, turned themselves in and were also ordered to commit seppuku. Because the revenge attack took place on a December night, the story is as much part of the year-end calendar as A Christmas Carol is in the west.

Though names such as Asano, Kira, and ronin leader Oishi Kuranosuke are familiar to all Japanese, Yakusho, perhaps best known overseas for his role in “Babel,” and Sato Koichi will play the roles of two lesser known men. Seo Magozaemon was a retainer to Oishi and escaped the night before the mission, while Terasaka Kichiemon disappeared the after the attack and, as a common foot soldier rather than a samurai, is considered by many not to be included with the ronin. The new movie is based on a novel about the two men’s reunion 16 years later, which was also the basis for an NHK drama special in 2004.

Oshio Manabu Gets Suspended Sentence
GReeeeN Not Going All Dental