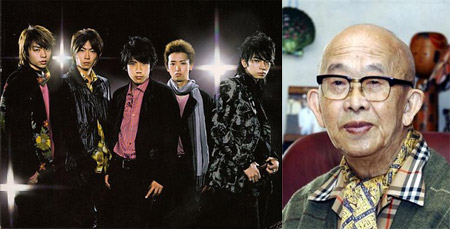 The PR campaign for this year’s Kohaku is picking up steam. NHK is celebrating the 60th anniversary of its annual New Year’s Eve song contest “Kohaku Uta Gassen” and wanted to get some big names on the bill. As we previously reported, they have singer-actor Fukuyama Masaharu, who will appear via satellite hookup from Kochi. That’s the hometown of the legendary samurai Sakamoto Ryoma, the role Fukuyama will play from January in the year-long taiga drama series on the public network. They also have reunited folk group Alice, who’ll be on the show for the first time in nine years. And over the weekend, NHK announced the artists who’ll be making their debut on the show.

But the biggest name is that of Arashi (photo left), the Johnny’s Jimusho idol group who are celebrating their 10th anniversary this year. The invitation will culminate a great year for Arashi (translates as “storm”), who have the two best-selling singles of 2009, a million-selling greatest hits album, and whose five members are in movies and all over the TV schedule. With SMAP appearing on Kohaku for the 17th time, Tokio for the 16th, and newcomers NYC Boys, there will be four Johnny’s acts on the bill for the first time in 21 years. SMAP member Nakai Masahiro will again be co-presenter with actress Nakama Yukie.

The other debutants this year are: Remiromen, Flumpool, Funky Monkey Babys, Kimura Kaela and Mizuki Nana. Kamiji Yusuke will appear solo, though he was a member of the trio Shuchishin last year. Meanwhile, pop group Exile will follow up their recent performance for the Emperor with their fifth Kohaku appearance. But they have a long way to go before they catch up with the likes of Wada Akiko (33rd time), Mori Shinichi (42nd) or Kitajima Saburo (46th).

• Japan has lost another of its greatest postwar lyricists. Oka Toshio (photo right) died of kidney failure last night at a Tokyo hospital. He was 92. He took up a writing career at the age of 18 and became a reporter for the Mainichi Shimbun newspaper in 1942. After WWII he joined Nippon Columbia as a lyricist. Over the next three decades he turned out dozens of hits including “Koukou Sannensei” and “Tokyo no Bus Girl.” He also wrote the popular children’s song “Neko Funjatta” and the themes to several popular anime. He was honored with an Order of the Sacred Treasure medal from the Emperor in 1988.