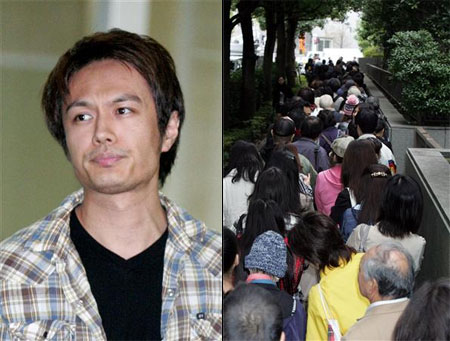 Actor Oshio Manabu (31) received the latest drug-related court verdict at the Tokyo District Court today. Prosecutors had emphasized the fact that Oshio’s drug use at a Tokyo apartment on August 2 was not an isolated incident, and that he had been evasive and misleading in his statements to police. Under questioning, he admitted to using MDMA (ecstasy) for at least the last couple of years and while in the U.S. in March and July of this year. Judge Iguchi Osamu gave Oshio an 18-month prison sentence, suspended for the maximum five years, somewhat harsher than is usual for a first time offense. He said, “The plaintiff has said he will not take drugs again and the court feels it is fitting that he receive one more chance at rehabilitation in society.”

The actor is still not out of the woods yet, however. Police are still investigating Oshio’s involvement in the death of Tanaka Kaori (30). The former Ginza hostess was found naked on a bed in the same Roppongi Hills apartment with the same drug in her system. Police believe she was alive for about 30 minutes after the drugs started having an adverse affect on her. But rather than call for an ambulance or the police at the time, Oshio called his manager before moving to another apartment in the building. The authorities were not called to the scene until about three hours after Tanaka’s death.

Today’s hearing drew about 1200 members of the public looking to get one of the 21 seats in the courtroom’s public gallery. They did not include any members of Tanaka’s family.