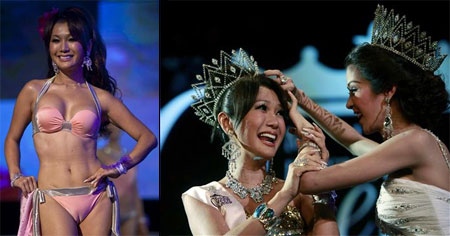 The newly crowned Miss International Queen is from Japan and is proud as punch. Oh yes, he is. The last night of the annual pageant, held since 2005 in the Thai resort of Pattaya, saw 18 contestants from such countries as Thailand, China, the Philippines and the U.S. But for the first time the title went to a Japanese, in the form of popular talento Haruna Ai. One of the country’s many “new half” transsexual personalities, Haruna was in shape to enter the contest after undergoing a radical diet program for a variety show earlier this year. And although the pageant’s website gives the eligiblity age range as 18-36, an exception was presumably made for Haruna, who is 37. A successful business owner as well as a bubbly TV natural, Haruna leaped to fame in 2007 with a tongue-in-cheek impersonation of popular pop idol Matsuura Aya.

In addition to the winner’s trophy and tiara, Haruna receives cash prizes totaling $10,000 and gifts from sponsors. Haruna and fellow Japanese Tukishima Beni also won prizes the night before when they took the top and runner-up spots at a talent contest. The weeklong event is produced and organized by Tiffany’s Show Pattaya, the world’s largest transvestite/transgender cabaret show and supported by the Tourism Authority of Thailand.