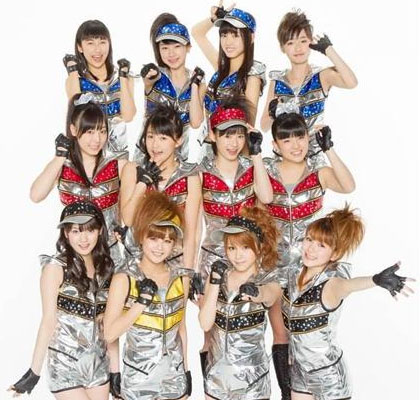 There’s life in the old dog yet. In the last few years the media and marketing machine known as Morning Musume (profile) has been largely eclipsed by the new kids on the block, AKB48. But they certainly haven’t gone away. MoMus, currently in their 15th year, have been around since before nearly half of of the current members were even born. No doubt it’s that ever-changing lineup that helps the aidoru group maintain a young fanbase, and they can certainly still shift a few singles. Their latest release, “Renai Hunter,” has entered the Oricon weekly singles charts at No.3, making it the group’s 49th consecutive Top 10 single. Despite their longevity and massive sales achievements, this is the first time for them to have sole possession of a major record, and it also means they’ve knocked J-pop diva Hamasaki Ayumi (33) out of her share of first place.

The new single will be the last to feature current group leader Niigaki Risa (23) who, although she joined at the time of the fifth lineup change in 2001, is the oldest and longest-serving member. She will be “graduating” from the group on May 18.

Elsewhere in the Oricon rankings, male aidoru group Sexy Zone are on top of the singles chart with “Lady Diamond” and Domoto Tsuyoshi (33) of the duo Kinki Kids is atop the album chart with “Shamanippon.”