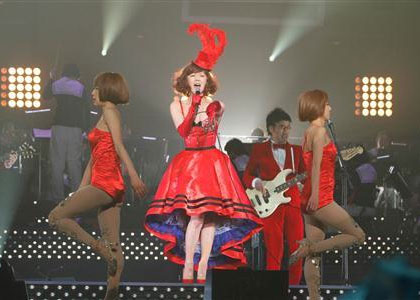 Rock band Tokyo Jihen have called it a day. The five-member band, fronted by vocalist Shiina Ringo (33), performed their final concert at the Nippon Budokan in central Tokyo last night. They played two encores to round off a 29-song set that finished with the 2006 song “Toumei Ningen” (Invisible Man). The show brought to a close their short farewell tour and followed the release of an original mini album, live album and DVD last month.

Shiina was already an established solo star when she turned her touring band into Tokyo Jihen – the name translates as “Tokyo Incidents” – in 2004. The band released one album before undergoing a major lineup change and the release of “Adult” in 2006, which became their first Oricon chart topper.