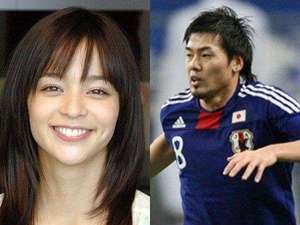 Kato Rosa (26) and Japan international soccer player Matsui Daisuke (30) have announced on their respective blogs that they got married on June 22, Kato’s birthday. And they also revealed that the popular actress is four months pregnant and expecting their baby in December. Management for Kato said she is scheduled to attend a charity event on June 27 and will take maternity leave once her current work commitments wind down, such as filming for the movie “Gaaru” (Girl), due for release next summer. One of the up-and-coming actresses of her generation, she has been previously romantically linked with such celebrities as actor Tamaki Hiroshi and Johnny’s Jimusho star Akanishi Jin.

Kato visited South Africa in June of last year for a TV show during the World Cup and is thought to have started a relationship with Matsui as a result. He is currently negotiating a transfer from second tier French club Grenoble and he and his new bride will make their new nest wherever he ends up playing. Kato is said to be planning to continue her acting career.