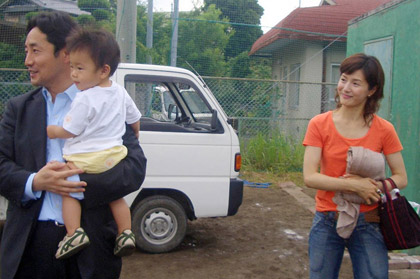 Actress Mizuno Maki (41, photo right) is said to be in a state of shock following the revelation of her politician husband’s extra-marital activities. This week’s issue of the gossip magazine “Friday” published photos of Liberal Democratic Party member of the House of Representatives Gotoda Masazumi (41, photo left) in a clinch with a Ginza bar hostess. At a bar in the Roppongi entertainment district, the pair are said to have disappeared together into a toilet for 20 minutes. The woman is also said to have spent the night at the taxpayer-funded high-rise accommodation for politicians in Akasaka. The facility is provided for politicians based outside Tokyo and only family members are allowed to accompany them.

The revelation came the same day as Gotoda’s party led a no-confidence motion against Prime Minister Kan Naoto (62) and his cabinet, throwing politics into disarray at a time when the country needs leadership the most. Gotoda is a member of an LDP panel tasked with coming up with measures to deal with earthquakes and has visited Tohoku several times since March 11. In light of the current scandal, he is likely to step down from all such posts. He has been married to Mizuno for seven years and they have a son (6). A women’s magazine reported in 2009 that the couple were living separately but sources say they have not considered divorce.

Megumi Nursing Rocker Hubby
Talento Megumi (29) spoke yesterday about the recent hospitalization of her husband, Dragon Ash vocalist Furuya Kenji (32). The rock star is being treated for multiple hemorrhagic gastric ulcers, which his attributed to overwork. She said, “I’d heard quite a few people have had stomach bugs, so I was keeping an eye on him. But when he had a checkup it turned out be ulcers. Considering his age, he’s maybe been working too much.” Megumi is currently between projects and is nursing her husband. 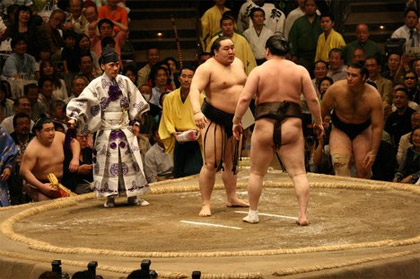 NHK chairman Matsumoto Masayuki (67) announced yesterday that the national broadcaster will resume live coverage of major sumo events, starting with the upcoming Nagoya basho (grand sumo tournament) from July 10. The sport has been in a serious crisis this year as it reeled from revelations of bout fixing. There have been more than two dozens dismissals and force retirements and even the cancellation of the spring basho in March, the first in modern history. A low profile version of the summer basho was held in May in Tokyo, and described as a “Technical Examination Tournament.” Spectators were not charged for admission and no cash prizes were given to wrestlers. The fate of the Nagoya basho was in doubt until yesterday, when the Japan Sumo Association announced that it would go ahead.

Explaining NHK’s position, Matsumoto said that the JSA has taken suitable steps to remedy problems in the sport. He also added what has now become a standard rallying call, saying that people across the country, including those affected by the March 11 disaster, have been calling for TV coverage to resume. Though the sport’s image has been tainted for some time, its current hero is on a path to create history. Mongolian yokozuna (grand champion) Hakuho (26) won the May basho with a 13-2 record, tying former yokozuna Asashoryu’s all-time record of seven consecutive titles. In Nagoya, he will be aiming to overtake Asashoryu and improve his own career total of 19 titles.