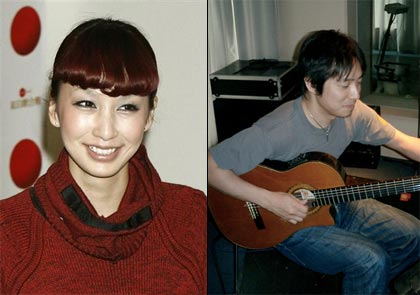 J-pop star Nakashima Mika (27) has a new man in her life, according to today’s issue of weekly women’s magazine “Josei Seven.” The singer lives in the same apartment building as guitarist Tanaka Yoshito (36), and last week they were spotted dining with Nakashima’s mother. The couple are believed to have started dating last summer. Nakashima’s management agency refused to comment on the story, saying that it was a private matter.

A producer and session musician, Tanaka has worked with some of the top stars in J-pop. He has produced work by such names as Moriyama Naotaro (34) and Suga Shikao (43) and has been a studio guitarist for Hirai Ken (38) and Imai Miki (47). He first played on tour and in the studio with Nakashima in 2002. In 2006, he was briefly married to Wyolica vocalist Azumi. Nakashima ended a 5-year romance with actor Nagase Masatoshi in 2008.

Nakashima is soon to appear in her first starring role in a TV drama series. She will appear alongside Tokio member Nagase Tomoya (31) in “Unubore Keiji” on the TBS network from July 9.