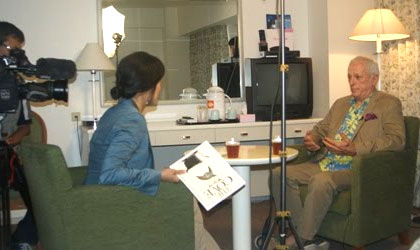 It was announced yesterday that six movie theaters across the country have confirmed they will screen the controversial documentary “The Cove” early next month. The Academy Award-winning movie documents the annual slaughter of thousands of dolphins in the town of Taiji, Wakayama Prefecture, and the fact that the dolphin meat is sold for public consumption despite containing dangerous levels of mercury and other toxins. The film has been the focus of protests and threats from radical right-wingers, which has led to several cinemas canceling plans to show it.

But this in turn has led to protests from prominent journalist and movie makers who have insisted on the right of the Japanese public to see the movie and make up their own minds. Even the prominent nationalist Suzuki Kunio has criticized the actions of right-wing groups as an attack on the freedom of speech in Japan.

Dolphin activist Ric O’Barry, who stars in the movie and has spent the last two weeks in Japan speaking to students and the media (photo), has said, “This is not North Korea. It’s not China and it’s not Cuba. It’s a democratic society. There’s a very small minority of radicals who are going to theater owners and threatening them. They don’t want people to see this film.”

In a press conference in Tokyo yesterday, movie distributors Unplugged announced that six cinemas (in Hachinohe, Sendai, Tokyo, Yokohama, Kyoto and Osaka) will screen the movie from July 3, with another 16 set to do so on later dates.

Japan’s World Cup Fever Not So Hot
TV Asahi must be disappointed with the audience rating they got for Japan’s recent World Cup clash against Holland. Having won their first game against Cameroon, the nation’s first World Cup victory on foreign soil, the mood going into the second game was good, even if it was against the heavily favored Dutch. And the studio coverage of the game was hosted by SMAP member Katori Shingo.

But while NHK’s coverage of Japan’s tournament opener averaged around 45%, that figure actually dropped to 43% for the second game. The peak rating was 55.4% as the final whistle blew at 10:19pm Japan time. It’s likely that the final scoreline – a 1-0 victory to the Dutch – played a part. The crucial last group game against Denmark kicks off at 3am on Friday, so the NTV network is just hoping to match the 28.5% rating for the match against Brazil in the 2006 tournament in Germany, which had the same kickoff time.