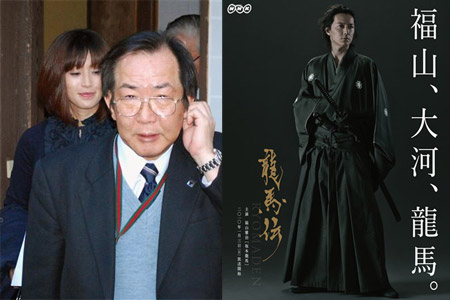 Sakai Noriko (38) started to get her life back on track yesterday, ten days after she was found guilty on charges of drug possession and use and received a 3-year suspended sentence. Sakai, described in the media these days as a “former actress,” visited the campus of Souzou Gakuen University in Takasaki, Gunma Prefecture, where she has enrolled in the social work department. She toured the campus, about an hour north of Tokyo on the shinkansen, chatting with other students and even enjoying a tea ceremony in the school’s tearoom. She was soberly but fashionably dressed in dark blue and her hair, which was black for her trial last week, was again dyed brown. She was accompanied by an entourage that included Aizawa Masahisa (60), the former president of her management company, Sun Music, who demoted himself from the post over the scandal. Aizawa has been like a substitute father for Sakai since recruiting her as a teenager. Speaking on her behalf yesterday he said, “We had planned for her to attend the school about once a month, but from December on she will be focusing on online learning.” He added, “She is smiling like she’s just returned to her school days.”

• Singer-actor Fukuyama Masaharu (40) has been named to the lineup for this year’s “Kohaku Uta Gassen.” It will be his second appearance on NHK’s annual New Year’s Eve concert, and the first since he sang “melody” in 1993. The appearance is undoubtedly tied to the fact that Fukuyama is playing the lead role in next year’s taiga drama. In the 2010 yearlong historical drama series, “Ryomaden,” he will play the legendary 19th century samurai Sakamoto Ryoma. Usually the following year’s taiga star appears on Kohaku as a judge, and in fact Fukuyama will be the first solo artist to do so as a performer. His popularity is such that an on-stage appearance is likely to give the show a needed ratings boost. In his 20th anniversary year, he performed at Nippon Budokan for the first time; went on a 4-month nationwide concert tour; released two singles in the same year for the first time since 2000; and released his first original album since 2001.