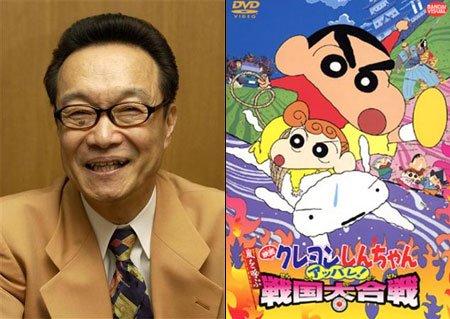 The world of anime has lost two veteran figures this week. The body of a a man, believed to be manga-ka Usui Yoshito (51), was found in the mountains bordering Gunma and Nagano Prefectures by a climber on Saturday morning. The body was found at the foot of a cliff on Arafuneyama mountain, where Usui said he was headed when he was last seen a week ago. Usui is the creator of the popular manga and anime “Crayon Shinchan” (image right). The manga first appeared in 1990 and the anime has been shown weekly on TV Asahi since 1992. There has also been a big-screen version every spring during that time, indicating the continuing commercial success of the franchise. But while popular with kids, the character has always been one that parents hope they won’t emulate and the show has long ranked highly among those that parents won’t let their kids watch.

• Meanwhile, veteran voice actor Kamiya Akira (63, photo left) says he is stepping down from his signature role. In a post on his blog on Friday, his 63rd birthday, he said he will no longer be the voice of Mori Kogoro in the long-running NTV anime series “Meitantei Conan.” He didn’t go into detail but the blog post suggested that he had been fired due to a contract dispute. The September 26 edition of the show will be Kamiya’s last. Over the years, Kamiya has provided the main voices in such major anime as “Kinnikuman”, “City Hunter” and “Hokuto no Ken.” he first ook on the Kogoro role in 1996.

• Happier news for singer/actress Tsuchiya Anna (25). She announced on her blog on Saturday that she is pregnant. The father is her 28-year-old stylist. Tsuchiya has a boy from a previous marriage.