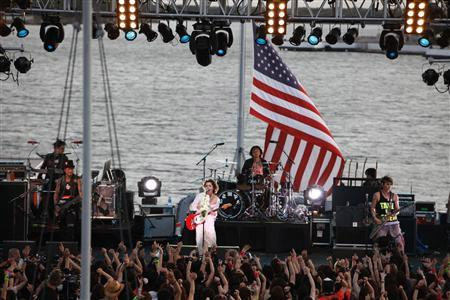 Talk about an interesting choice of venue. J-rock supergroup Vamps finished off their world concert tour with a show on a ship – not just any ship but the USS Missouri in Pearl Harbor, Hawaii. The battleship was where the official surrender agreement was signed between Japan and the Allies in Tokyo Bay in September 1945. It was decommissioned in the 1990s and is now a museum. Yesterday’s concert was the first major music event to be held on board. Interestingly, the event doesn’t seem to have drawn any attention from the mainstream U.S. media.

Flanked by the ship’s 16-inch guns and with the stars and stripes flying behind them, the band performed 20 songs, including the upcoming release “Sweet Dreams.” About 600 fans paid $150 each to see the unique show. Vamps was formed in 2008 around L’Arc en Ciel frontman Hyde and Oblivion Dust guitarist K.A.Z. The lineup also includes bassist Ju-ken, who has performed with Gackt and X Japan’s Yoshiki. They have released one album and three singles. The tour took in 60 shows in Japan and the U.S. and finishing off in Hawaii, which is in more than one way the meeting point between the two countries, was heavily symbolic. Hyde said, “I think it’s great that an instrument of war can be used to send out a message of peace like this.”