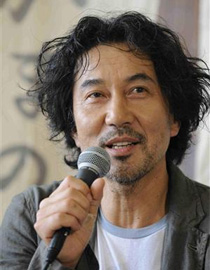 Actor Yakusho Koji (52) is working both sides of the camera for a change. One of Japan’s most accomplished actors, he is making his directorial debut in “Gama no Abura,” in which he also plays the lead role. The movie, described as a “fantasy drama,” tells the story of a day trader and his wife (Kobayashi Satomi, 43) as they breathe new life into their relationship. Describing his first experience behind the camera, Yakusho said, “It’s terrible! I hate giving the okay to a scene I’ve just performed, but it’s hard for me to say to do it again.” But he was full of praise for his young co-star Eita (25), who plays his son. “He doesn’t do the over the top acting that’s so popular with youngsters today. I have a lot of faith in him.” The movie is filming until the end of this month and is due for release next year. Distributors Phantom Film said, “Yakusho’s an internationally recognized actor, and we’re hoping to have the film shown at Cannes next year.”

• Former Morning Musume member Goto Maki (22) has joined the major Avex record label, the company announced yesterday. Goto quit the Hello! Project and Up Front Agency last year following the arrest on robbery and assault charges of her younger brother Yuuki (21). There were doubts as to whether she would be able to continue her career but she insisted, even as Yuuki was given a five-and-a-half year prison sentence in May, that she would not give up her music. The tenth anniversary of her debut is coming up in August and she will probably be back performing by then.

• Actress Kuroki Meisa (20) has made her official singing debut. She released the single “Like This” for download on Wednesday and attended a PR event for Toshiba’s latest model for the KDDI/au mobile phone service yesterday. The song is to be used in Toshiba’s TV commercials, on air from tomorrow. Kuroki did perform a number for the soundtrack of the movie “Crows Zero” but the new single is the first using her own name.

• Already having a breakthrough year, comedienne Edo Harumi has been handed one of the best – and toughest – PR jobs on TV. She was named yesterday as the marathon runner on this year’s NTV 24-hour charity telethon. She’s the fifth female runner, and the first since Sugita Kaoru in 2004. The physically and mentally demanding run is usually over 100km and the spectacle of a celebrity in pain, not to mention the inevitable tension as to whether they’ll actually reach the Tokyo studio before the show finishes, helps draw in large donations every summer. Edo, whose manic “gu, gu, guu!” routine has made her hugely popular this year, has been running 10km a day to get in shape for the August 30-31 show.

Leads Announced for Koizora Drama
The Who to Tour Japan