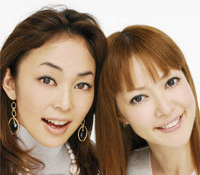 Comedienne Matsushima Nahomi (36, photo right) and musician Hisada Toshihiro revealed at the weekend that they are engaged to be married this morning. In a written statement to the media, Matsushima said she would give a press conference after her late-night TV Tokyo live variety show “Kirakira Afro” tonight. By that time, the couple will be married, with a ceremony for family and close friends planned for today. Today was chosen as it’s an auspicious “taian” on the traditional Japanese calendar. Matsushima is one half of the popular duo Othello, while Hisada is the vocalist of the band Marsas Sound Machine. The couple are both natives of Osaka and met when they were both with the same management agency. Hisada was a member of the comedy combi Noize, while in 2005 Matsushima formed the rock band Killers.

• Popular Johnny’s Jimusho band Arashi are to be just the third artists to play a solo show at the National Stadium. The September 5 concert will be the band’s first outdoor show and kicks off their 4-city Asian tour, which will also include Taipei, Seoul and the first Johnny’s concert in Shanghai. The news was announced last night at Tokyo Dome, where the band played for 55,000 fans in their ongoing tour of five dome shows. Fellow Johnny’s stars SMAP played the National Stadium in 2005 and 2006, and last year it was the turn of Dreams Come True. This autumns see the 10th anniversary of Arashi’s debut.

• In their 20th anniversary year, rock band Glay are to perform in the U.S. for the first time. Leader Takuro (37) and vocalist Teru (37) announced on a live radio show at the weekend that they will play three shows, in San Fransisco (August 12) and Los Angeles (August 15 & 16). In their first venture overseas since a show in Beijing in 2002, each show will be held at a medium-sized venue that can hold about 1,200 people. That pales in comparison to the 200,000 they played to at Makuhari, Chiba Prefecture in 1999. But Takuro hinted that next year, which marks 15 years since their recording debut, may see a return to the U.S. The band also recently landed the job of providing the theme tune for an upcoming Korean action movie.

• Movie director Nakata Hideo (46) recently got married, it was revealed last Friday. His bride is described as working in the TV industry. Nakata is the man behind such modern horror hits as “Ringu” and “Kaidan” and the “Death Note” spinoff “L: Change the World.”

• Japanese stars Osawa Takao (40) and Momoi Kaori (56) are in China for the 11th Shanghai International Film Festival. Momoi is on the festival jury, while Osawa attended Saturday’s opening ceremony as the star of “Tsukiji Uogashi Sandaime,” which has been entered in the main competition.

• Kimura Takuya (35) doesn’t seem to have brought his magic touch to the Fuji TV drama series “Change.” Though KimuTaku’s popularity has put many of his dramas at the top of the record books, the latest series is struggling. Last Monday’s episode got a 19.5% rating, the second week in a row that the lightweight political drama was below the key 20% level. Fuji’s “Last Friends,” which airs on Thursday nights and deals with such issues as domestic violence and sexual identity, got a rating of 20.7% last week and is sure to beat that with this week’s final episode. The most successful drama of the season is NTV’s third season of “Gokusen,” which opened with a rating of 26.4%.