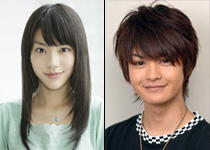 Two young actors have been chosen for the lead roles in this summer’s TBS drama adaptation of “Koizora.” The story that started out as a “keitai shosetsu,” or novel writen for mobile phones, became a million-selling paperback novel and was made into one of the hit movies of last year. Starring Aragaki Yui (20) and Miura Haruma (18), the high school romance tinged with serious themes like pregnancy and miscarriage made ¥3.9 billion at the box office. Over 500 people auditioned for the TV drama lead roles, with Mizusawa Erena (16) and Seto Koji (20) being the lucky ones. Mizusawa, a native of Aichi Prefecture who is half Korean, started out as a model in teen magazines and has appeared in dramas and TV commercials for the last couple of years. Seto made his acting debut in 2005 and this year has been playing the lead role of the tokusatsu masked rider hero “Kamen Rider Kiva.”

• NHK announcer Shudo Nachiko (28) got married in the spring, it was revealed yesterday. She and her husband, who works for a major movie studio, met while both were university students. Shudo joined NHK in 2003 and worked at the branch in her hometown of Matsuyama. Three years later, she moved to Tokyo and is now a presenter on the weekday morning news show “Ohayo Nippon.”

• Yesterday, veteran singer Suizenji Kiyoko (62) performed her first concert since undergoing throat surgery. In her first ever acoustic show, the singer known by the nickname “Cheetah” said she was fully recovered from the February surgery to remove a polyp. She performed a song written for her by top lyricist Kawauchi Kouhan shortly before his death in April. She said, “I regret that we never had a chance to meet. We said we’d wait until after I recovered from my surgery.”