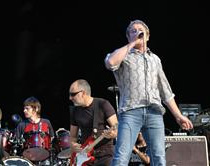 On the verge of qualifying for their state pensions, The Who are finally to play their first solo concerts in Japan. 43 years after their debut, the legendary British rockers will play four cities in November. Of course, the band lost drummer Keith Moon back in 1978, and more recently bassist John Entwistle in 2002. With Moon replaced by Zack Starkey (42), vocalist Roger Daltrey (64) and guitarist Pete Townshend (63) did play Japan once, at the Rock Odyssey festival in Osaka and Yokohama in 2004, and they hinted last year that a tour to Japan and Australia was on the cards. Touring with the same lineup, they are scheduled to play Osaka Castle Hall on November 13, Yokohama Arena on the 14th, and Saitama Super Arena on the 16th. The premium event has to be the final show at the venerable Nippon Budokan on November 17, but the 40,000 or so tickets for the tour are likely to be like gold.