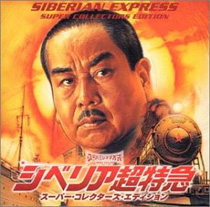 Japan’s movie world yesterday paid tribute to one of its most renowned critics. Mizuno Haruo died of liver failure on Tuesday afternoon at a Tokyo hospital. He was 76. Born in Okayama Prefecture, he spent his early years in Manchuria, then a Japanese colony. He returned to Japan after WWII and first got into the movie business in 1956, doing movie promotional work for 20th Century Fox. He became a household name as presenter of the NTV weekly Wednesday Roadshow, which showcased western movies. The show later moved to Friday nights with Mizuno at the helm for 25 years. He made an unsuccessful attempt to run for national politics in 1983. In 1996, using the name Mike Mizuno he tried his hand at directing himself in “Siberian Express,” which became a series of movies that is still ongoing. He played the character General Yamashita Tomoyuki in the movies, reflecting his own real name of Yamashita Tomohiro. Actress Mita Yoshiko (66), who was to play his wife in the eighth and final movie in the series, expressed her sadness that Mizuno couldn’t see his life project to the end. Mizuno was the first critic to predict her future success when she debuted back in 1960. Kabuki actor Nakamura Fukusuke (47), who appeared in two of the movies, heard the news while performing at the Kabukiza theater when he heard the news. He said it was huge loss, not only to the world of cinema but also personally.

• With X Japan once again forced to take a hiatus, vocalist Toshi (42) announced a new band project yesterday. The full lineup has yet to be named, but “Toshi with T-Earth” will include guitarists Toya and Jun and will be produced by Masaya, the man often described as a cult leader and responsible for Toshi leaving X Japan in 1997. The two collaborated extensively on a mix of new age and rock music during the decade up to X Japan’s recent reunion. With the group’s world tour plans on hold, the new “eco hard rock” band will perform shows in Japan. They will play eight shows in six cities, starting at Zepp Nagoya on August 12 and ending at Zepp Tokyo on September 3 & 4.