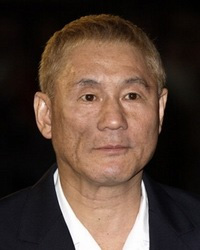 Director Kitano Takeshi (61) is to receive a special award at the upcoming 30th Moscow International Film Festival. Although he’s in the middle of making his latest feature film, he plans to attend the festival’s opening event on June 19, where he will be presented with a “life-time achievement award for the outstanding contribution to film arts.” Six of his films are to be screened over the nine-day festival. Though a regular at festivals such as Cannes and Venice, it will be his first time to take part in Moscow. “I had heard rumors (of my reputation in Russia) such as that “Dolls” ran for over two years in Moscow, but to be invited to receive a major award like this is very gratifying. I look forward to seeing with my own eyes how Russian audiences react to my films.” Kitano’s latest work is “Akiresu to kame” (Achilles and the Tortoise). Also receiving an invitational screening at Moscow will be “Hana wa Chiredomo,” the latest film from veteran director Shindo Kaneto (96), which opens here in September.

• A song by young singer_songwriter Ayaka (20) has been chosen as the theme tune for the latest feature from top anime director Oshii Mamoru (56). “Konya mo Hoshi ni Dakarete” was used in the trailer for “The Sky Crawlers” but, in a rare move, Oshii liked the song so much he decided to redo the ending credit sequence to incorporate the song as the main theme. Though Oshii is on record as saying he doesn’t like to use pre-recorded songs in his features for fear of “destroying the movie’s image,” he said “This song adds a new kind of strength to the movie.” The song is the final track on Ayaka’s upcoming album “Sing to the Sky,” to be released on June 25. The Sky Crawlers opens on August 2.