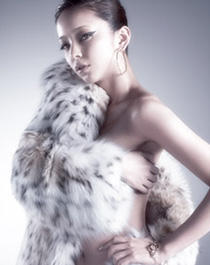 J-pop princess Amuro Namie (30) is to perform at the upcoming concert for shareholders of major record label Avex. The June 22 show at the Saitama Super Arena is described as the biggest ever by the company, which this year celebrates its 20th anniversary. In fact, with Sony’s event being attended by about 7,300 people, the 20,000-seat arena show is probably the biggest by any music company. Held each year after the annual shareholder’s meeting, the event was held at the Tokyo International Forum for the last seven years. It usually features the label’s top stars, such as Hamasaki Ayumi (29), Koda Kumi (25), and Otsuka Ai (25). But Koda has had a bit of a difficult year and Hamasaki has the Osaka show of her national tour on the same night. So Amuro has stepped in to headline the show. It’s her first appearance in eight years and she is long past the heyday of her popularity when she was the first singer to be dubbed a “pop princess” in her teens. But she had some success with a recent single, has a greatest hits album coming out on July 30, and a 15-arena tour starting on October 25.

• A stuntman was killed on the set of Chinese blockbuster “Red Cliff” on Monday, local media reported yesterday. The John Woo-directed historical action drama is based on a famous battle during the Three Kingdoms period of ancient China. CNN reports that the scene – supervised by a second-unit director – featured a small boat set aflame, which was meant to collide safely with a larger warship fitted as the day’s set. After the collision the fire burned out of control on both ships. A 23-year-old stuntman died and six others were injured. Production has been halted temporarily. The $80-million production is said to be the most expensive in Asian movie history. Starring Tony Leung Chiu Wai, the cast also includes Japanese actors Kaneshiro Takeshi and Nakamura Shido.

• X Japan vocalist Toshi spoke on a radio show yesterday about the recent postponement of the band’s world tour. As we reported here yesterday, the cause is said to be the worsening medical condition of drummer and leader Yoshiki. But Toshi said that the problems were really not something to worry about and had been maybe a bit exaggerated. He said he plans to give a more formal announcement today, including details of a personal project.

• Doctor/talento Nishikawa Ayako (37) was all over visiting Hollywood actor Casper Van Dien yesterday. The star of “Starship Troopers 3” rejected her come-ons, insisting he was very happily married to actress and former Yugoslavian princess Catherine Oxenberg. A former Miss Japan, Nishikawa’s image as a TV quack was further enhanced when it was revealed that she failed to submit her details on time for a Health Ministry national registry of doctors.