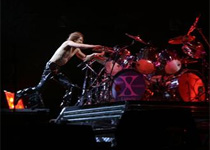 X Japan have indefinitely postponed their much-awaited world tour. Following the weekend announcement that leader and drummer Yoshiki had canceled a planned Asia trip, it was revealed yesterday that the reason is his worsening medical problems, and doctors have ordered him to take a complete rest. He had a previously diagnosed hernia of a intervertebral disc and tendonitis and for several years has been forced to wear a corset while playing the drums. But when the group performed their first concerts in 10 years in March, he refused to wear the corset and even did a dive onto his drum set (photo) and played what is considered one of rock’s most intense drum pieces, “Art of Life,” on the opening night. In addition to worsening his existing medical problems, the drum kit dive caused damage to both knees. But after the March shows, X Japan announced concerts in Paris on July 5, Taipei on August 2 and New York on September 13, and they were back on stage in early May for memorial concerts to mark the 10th anniversary of the death of guitarist Hide. Sources say that Yoshiki is currently at his home in Los Angeles undergoing both western and Asian medical treatment. He is wearing neck brace and is prohibited from any strenuous travel. X Japan has taken hiatuses in the past due to Yoshiki’s physical over-exertion, for six months back in 1990 and again for nine months in 1996. But the extent of the problems are thought to be more serious this time.

• Actress Kitagawa Keiko (20) and actor Kimura Ryou (19) were spotted on a recent karaoke date, according to today’s issue of the weekly magazine “Flash.” The magazine published photos of the two at a karaoke box and video rental store in May. They spent the night at Kitagawa’s Tokyo apartment. In January, Kitagawa was voted No.1 in a poll of the most promising actresses for this year. She appeared in the 2006 Hollywood movie “The Fast & the Furious: Tokyo Drift.”