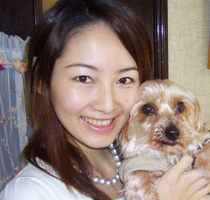 23-year-old Hagi Mika is the 39th Miss Japan. The Rikkyo University graduate school law student was chosen from 2,432 entrants at the finals held at the Keio Plaza hotel in Tokyo yesterday. She won a ¥14-million diamond tiara and a holiday in Phuket. It was the third time for Hagi, from Mie Prefecture, to enter the contest. Her mother first entered her without her knowledge while she was a high school senior, taking her measurements while she was sleeping. Hagi was a national debate quarter-finalist while in high school, and was a beauty queen while studying at Mie University in 2002. She worked as a local TV reporter at the Suzuka race circuit, also in her native Mie, before coming to study in Tokyo. The day before yesterday’s finals, she had been announced as the winner of the “Miss Nihon Sponichi Special Award”, chosen by readers of the Sports Nippon newspaper.

• The natto scandal has taken down a long-running Fuji TV show. After 27 years as sole sponsor of “Hakkutsu! Aru Aru Daijiten”, Kao Corporation has said it will no longer back the program after it was revealed that a recent show on the dietary benefits of eating fermented soybeans was largely made up by the production company. The Kansai TV show, broadcast nationwide on the Fuji TV network on January 7, will be taken off the air following more than 6,000 complaints from viewers and a government investigation, and KTV president Chigusa Souichiro may be forced to resign. (see yesterday’s story for more…)

A Big Stinking Lie
An Oscar for Rinko?