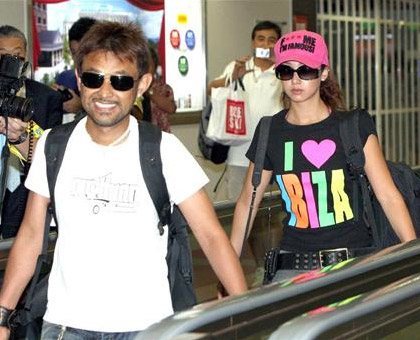 Actress Sawajiri Erika (24) is once again doing what she does best – getting the media excited and confused. It’s been several months since the media started speculating about her imminent divorce from hypermedia creator Takashiro Tsuyoshi (46). Sawajiri’s attitude and comments seemed to suggest that she had decided to formalize the split. But the couple were spotted together yesterday at Taoyuan International Airport in Taiwan. Sawajiri was there for a cosmetics company PR event but canceled at the last minute claiming she had a high fever. The Sankei Shimbun newspaper speculated today that the trip might have been an attempt at reconciliation by the couple. If it turns out that the trip is being used for private reasons at the expense of prior professional commitments, it could have a serious impact on her already poor image in the entertainment industry.

Once considered one of the most promising young actresses in Japan, Sawajiri seemed to have given it all up as her behavior became increasingly erratic after a famously moody PR appearance in 2007. Her marriage to the much older Takashiro took people by surprise, as did their decision to spend most of their time overseas (photo above). When Sawajiri finally made the move back to Japan earlier this year, pundits wondered whether the industry would even want her back, though she still had a loyal young female fan base. It seemed she had made a breakthrough when she started negotiations with the major Avex management company. But Sawajiri’s divorce is also said to have been one of the prerequisites of the contract, and negotiations are now reportedly stalled as the company has not been able to reach her since the beginning of this month.

Talking to reporters camped outside the family’s Tokyo home, Sawajiri’s mother denied that her daughter had been avoiding her responsibilities, adding that she spent some time in hospital last month and has recently been resting quietly.
Related stories:
Erika-sama Headed For Divorce? (Apr. 26, 2010)
Showbiz Bad Boys (and Girls) on the Comeback Trail (Mar. 4, 2010)
Bitch or Bad Hair Day? (Japan Forum, Oct. 3, 2007)