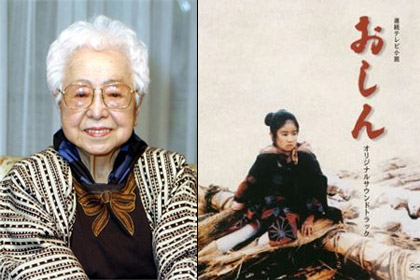 Japan has lost its oldest living actress. Nagaoka Teruko died of old age at her home in Tokyo in the early hours of October 18. She was 102. Best known for her role in the hugely popular NHK drama series “Oshin,” she had an eight-decade career as a theatrical producer, stage and TV actress and narrator.

A native of the northern city of Morioka, she went to study in Paris in 1928 after graduating from the Toyo Eiwa Women’s University. On her return to Japan two years later, she and her first husband formed the Teatoru Comedie theater group. Her husband died in 1937 and amidst growing militarism Nagaoka was forced to close down her theater group. She later joined the Bungaku Company, where she produced plays including those written by the up-and-coming Mishima Yukio. While continuing to produce, she made her formal debut as an actress in 1951 and made most of her 30+ movies in the 1950s. She left the theater group in 1971 and focused on stage readings of the Bible and the works of Miyazawa Kenji (1896-1933). She continued this work until recently.

Written by Hashida Sugako, “Oshin” was a massive TV hit from April 1983, and told the life story and struggles of a farm girl in northern Japan. The role of Oshin was played by three different actresses, including Tanaka Yuko (55) and Otowa Nobuko (1924-94), while Nagaoka played her employer. Aired for a year in the morning time slot, the series had an average audience rating of 52.6% – unthinkable today – and peaked at an even more impressive 62.9%, both records for a drama series that will probably never be broken. The series has been shown in dozens of countries worldwide and is considered Japan’s most successful ever drama export.